Performance Parts & Engineering (PPE) pulled the covers off its Bathurst-conquering Fiat Abarth 695 Assetto Corse for another giant-killing performance, this time at Phillip Island. 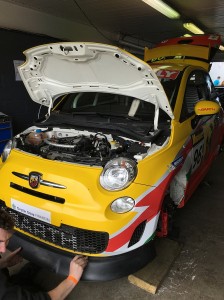 Abarth number 96 finished 18th outright at the 2014 Bathurst 12-Hour, taking Class F honours ahead of its sister machine in the process.

Fast-forward to November 2015 and ‘Island Magic’, where the ‘little rocket’ was entered in the Ramada Resort Phillip Island Sports Sedan race for original team driver and journalist Mike Sinclair.

The Abarth 695 was unchanged from its mountain-conquering suspension setup and even ran a set of Michelin slicks left-over from the Bathurst campaign.

After reacquainting himself with the machine on Friday, Sinclair took to Saturday morning’s qualifying session among 33 other vehicles, putting the Abarth on the 25th grid slot with a time in the 1:50 bracket. “A 1:48 would have been possible with less traffic… and more skill,” said Sinclair.

An eight-lap race was held on the Saturday afternoon with Sinclair able to maintain his grid position. This improved to 21st on the shortened Sunday morning, with four laps completed.

The main event was Sunday afternoon’s ten-lapper, where Sinclair was able to finish 21st once more.

Once more the PPE-prepared pocket rocket performed faultlessly throughout the event, a slight off on Saturday morning requiring some front spoiler work.

“It was great to watch the little Fiat holding sway with the massively more powerful cars around it,” said Heaphy. “It could brake 50 metres later into Honda [a hairpin corner].”

Sinclair also enjoyed it from behind the wheel: “It’s fair to say PI favours faster machinery but the PPE Abarth kept a lot of faster cars honest in the more technical sections of track and just ate them up in terms of braking ability and corner speed.

“The world’s smallest GT3 car has the ability to put a smile on your face in just a couple of corners. If it had another 50kW and I had some talent there would have been even more embarrassed V8s out there.” 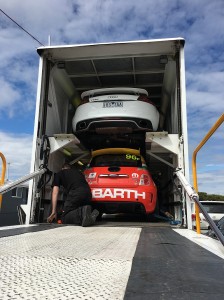