Le Mans 2015 And The Ppe Connection

It’s been 25 years since the mighty Nissan R90C sat on pole position for the most famous endurance motor race of all, the Le Mans 24 Hour. 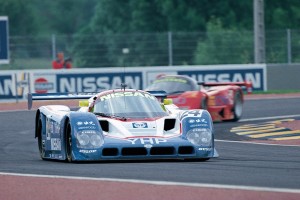 To celebrate the quarter anniversary, Nissan has revealed that the number 21 Nissan GT-R LM NISMO that will compete at Le Mans 2015 will be painted in the same livery as its R90C ancestor.

While driver Mark Blundell’s efforts in the 1990 qualifying session are well known, there is also an Australian connection: Alan Heaphy.

The story of how the NME pole position came about has been etched into La Sarthe folklore: “It was the sound I remember most. Sheer bloody thunder! Then he burst into view, sideways out of the last corner. I can still see it in my mind’s eye, clear as a bell,” Heaphy recalls.

Nissan is a brand particularly close to Heaphy’s heart, having worked his way up the ranks to manage NME under Howard Marsden’s tutelage. As well as the Group C Sportscar program, he managed Nissan’s European touring car program before returning to Australia to manage the all-conquering ‘Godzilla’ GT-R program for Fred Gibson in 1992.

Bathurst 1992 is a particular highlight, but the story of competing for endurance racing’s ultimate prize still sticks firmly in Heaphy’s mind. “I was heavily involved in the Group C engine development program,” he explains. “It was a shock to work in Japan… there were 102 engineers assigned to the 3.5-litre dohc twin-turbo V8 alone!”

The Lola-designed R89C arrived for the 1989 season and it was a baptism of fire. “We had good power, up to 800bhp in racing conditions. The reliability was reasonable, but we were pretty far off in terms of economy. I calculated that we used the allocated 2250 litres of fuel in 11 hours that first year at Le Mans.”

Building on the experience gained in 1989, the 1990 R90C was significantly updated. Attention was paid to aerodynamics with the aim of improving both airflow and fuel efficiency, while suspension and cooling systems were also enhanced.

Heaphy was able to convince the Euro/Japanese team to hot weather test at Victoria’s Phillip Island in the break before the 1990 World Endurance Championship commenced. “Mark Blundell and Julian Bailey [both reached Formula 1 in their careers] came out for the test, which was focused on tyre and endurance testing in the weather. We did turn up the boost at one point, and Blundell lapped Phillip Island in 1 minute 18.2sec. It was extraordinary,” Heaphy recalls.

The return to Le Mans started well. “Practice showed we had good pace, but we weren’t exactly trail-blazing. Come qualifying there were issues with the Blundell/Bailey/Gianfranco Brancatelli car, so we sent Blundell out in the spare. It was a rudimentary thing, with no radio and on used tyres.

“I was sitting at the pit wall, and the Japanese technicians were in an office overlooking the pits. Someone tapped me on the shoulder; the Japanese were frantically gesticulating. Heart pumping, I rushed upstairs, and almost fell over. The telemetry showed a boost pressure graph that was literally vertical!

“‘Pit, pit now’ they were shouting, so I frantically tried to contact our pit board operator who was stationed near ‘Indianapolis’ corner. When I finally got through all I deciphered was: ‘He’s already gone past… and he is flying!’

“Next, it was that sound. The time flashed up, and it was six seconds faster than anyone else. I looked behind to see all the other teams wheeling away their qualifying tyres.”

Although this was the first year of the Mulsanne straight having chicanes installed, Blundell recorded a trap speed of 366km/h on his way to a 3min, 27.020sec lap. “We got the thing back, and worked out that the wastegates had failed, thanks to a blown solenoid. We estimated the engine was producing around 1100bhp for that lap,” says Heaphy.

For the race, the ‘mule’ was put away in favour of the now-repaired ‘race’ R90C. The team of Blundell/Bailey and Gianfranco Brancatelli proved that the Nissan had race pace too, able to challenge in the lead pack for the first six hours before an on-track incident with a Toyota. Eventually, the R90C returned to the pits for good after 152 laps, but its legend had been cemented.

For Le Mans 2015 Blundell will be reunited with an R90C for some demonstration laps, retelling this legendary story – with an Australian twist – to a new generation of racing fans.