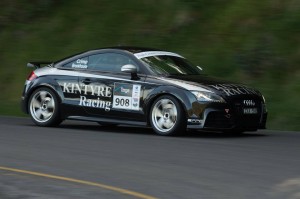 Crimp, along with co-driver Frank Brookhouse, had a trouble-free event in the Kintyre Racing Audi, which has benefitted from recent development work and honing during testing at Winton Motor Raceway.

“We concentrated on tyre development work with the latest Yokohamas,” says PPE crew chief Pete West. “It paid off with a consistent and quick performance.”

With 4WD Showroom now allowing the Nissan GT-R R35 it was another strong result for the Crimp TT RS, which recorded top five stage times during the weekend.

The Targa scene now turns its attention to 2016, with the 25th running of Targa Tasmania in April.